I was a first year nursing student, and my friend that I’d met, her godmother came here. So after that, there was big news about Medjugorje — you’ve got to come; this place is wonderful. I’d never been anywhere. Homebird. And I thought, ‘I’m not going.’

So what happens is, they book my ticket without me knowing. I had no way out. I had to come. That was 1984. October. And I was here for four days.

At first, I didn’t think very much of the place. I did the whole walk around from Krizevac to Podbrodo around to the church again, praying the Rosary. And then I went to the evening mass.

I just think that there was a grace. Like a silent grace that you can’t touch, but just having your soul present in that church of St. James, that then God can do what he wants with you. And that’s how I ended up here.

What happened was, this friend of mine, she was cleaning the church. Everybody was going out. And I thought, do the good deed and help her brush up, you know, in between the pews. So I was doing that and there was one man left with black hair like Elvis. So I told him, ‘Get out of the pew because I need to sweep.’ And my heart was going bump-a-dee-bump-a-dee-bump.

We knew each other, but we weren’t romantically attached. My heart was taken the very first time I saw him. And then he admitted to me after we got married, that his was too.

He then learned english after the first year of us being married.

Rosie is the host of Tea with Rosie on MaryTV where she provides an environment for fellowship after daily English Mass. 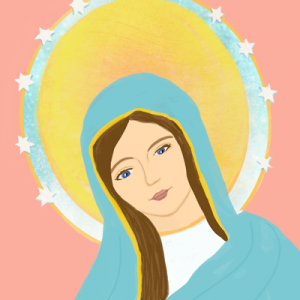 My Heart Will Triumph

Every pilgrim has a story.

iMedjugorje was created by non-profit Queen of Peace Productions and Stella Mar Films to help these stories come to life as a testament to what many believe is the most important spiritual event since the time of Christ.